Home > About Us > Our History

The Church of St James, in Mangotsfield, Bristol

Within the village of Mangotsfield, St James Church is our oldest link with the past. It was founded and built by William de Putot, Sheriff of Gloucestershire, as a Chapel of Ease between 1222 and 1228 in the reign of Henry III. This was before England had a parliament, and only seven years after Magna Carta, 1215. The chapel was built as part of his Manor House and had its own private way up a flight of steps in the north west corner. The Manor House was demolished in 1846 in order to enlarge the burial ground.

St James Church was built on the very verge of the dense forest and was made a dependency of St Peter’s Bristol in 1231, and was served by the priory of St James. In 1532, in this Chruch, Sir Thomas Berkeley was buried for “one quarter of a year” but was then reburied in St Augustine’s Abbey.

The earliest entry in the Church register is that which records the baptism of Ellinor, daughter of Christopher Coole, 25th April 1580.

Both inside and outside the Church are many monuments and inscriptions, one of which reads: “As I was, so now are ye, As I am, so shall you be; All you that this do see, Think upon eternity”

The Church was closed in 1811 by order of the ‘Lord Bishop of Bristol’, as Mangotsfield Church “be deemed unfit to assemble in for Divine Service”. The middle arcade was seventeen inches, and the north walls and their buttresses nine inches out of perpendicular – evidence either of lengthy neglect or subsidence due to coal workings for which Mangotsfield was well known. The tiling laths were “thoroughly rotten” and the roof would have to be stripped. Apparently, the arcade was not rebuilt at this stage and the new roof was a single span covering the whole of the expanse between the south wall and the north wall of the north aisle. It seems probable that the galleries, which had been at the west end for the poor children, and enlarged in 1806 to provide accommodation for general use, were at this time finally removed. The only remaining evidence of them is a sloping ledge under the west window.

Figures at the West end Door

During extensive reconstruction in 1851, the old historic porch at the west end, battlemented similarly to the parapet of the new tower, was removed to reveal the doorway to all who pass by. This doorway is a good example of the early English work, the two figures in niches on either side being very well preserved, due no doubt to their long protection from the weather. They bear the Blount arms. At the same time the middle arcade was rebuilt and the roof given its present two high pitched spans. The spire, which had formerly had a truncated square top, was rebuilt and completed. The old and small entrance to the tower is still visible in the south wall. 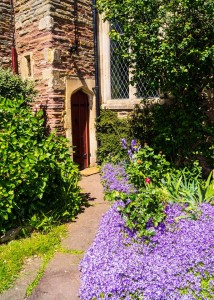 The tower entrance in the south wall

In the Church is an early piscina (a perforated stone basin for carrying away water used in rinsing the chalice). This can be seen in the wall to the right of the organ.

Our present building took its final shape from the drastic restoration and alteration in 1851. The modern stained glass windows are of great beauty – the east window depicting the Ascension, in which St James, the patron saint is a prominent figure in the centre, and the window in the south all of mother and child, given in memorial of the Cave family whose vault is at the south east corner of the chancel in the Church yard.

Another vestry was added in 1725 to replace the older vestry, which was at the east end of the north chancel aisle, and was finally demolished in 1851. The font is comparatively modern and was moved to its present position from the centre of the nave in 1921. 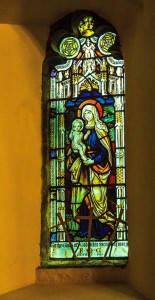 Stained glass in the south wall of a mother and child

Our dedication to St James is linked with our earliest association with the priory of St James, Bristol, whose precincts were our burial ground until 1438. Our minister was a perpetual Curate under the Prior of St James until the Reformation when the right of presentation was purchased from King Henry VIII by a Mr William Brayne of London, and continued until the foundation of the Peache Trust in 1901.

With the growth of the parish in the nineteenth century, the question of further Church accommodation arose. The parish Church was considered to be “too far away” and its size “inadequate”. In 1831 Christcurch, Downend was opened as a Chapel of Ease, and in 1874 Downed was constituted a separate parish.

Mangotsfield Parish now has few of its original village characteristics. The process has been not so much one of integration as of transformation, and the spirit of the old Church as become new, growing in Christian insights and experience, and tells of a God who is assuredly at work in this place – in and through those who are devoted to His service. 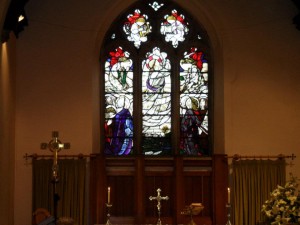 The transformation continues with the ongoing growth of Emersons and Lyde Green, and the possibility of enhancing and improving this much loved Church to the glory of God and the service of his people.

A fuller account of the history of this Church can be found in: “Our Parish in Mangotsfield & Downend” Written by Revd Arthur Emlyn Jones, Published by Kinsmead and is in the public library.